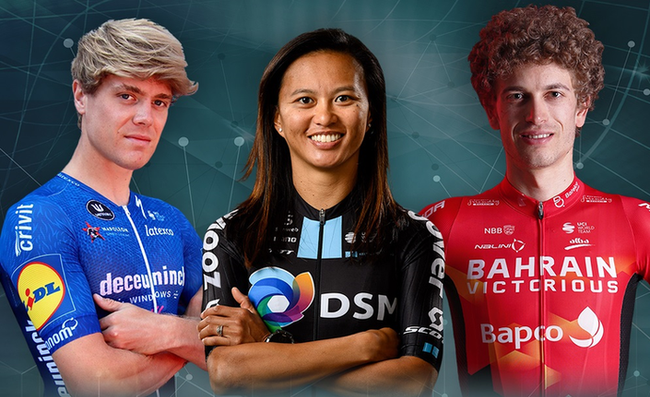 Zurich, Switzerland / November 18, 2021 - Who is riding with whom? Where in the world can you watch elite male and female cyclists and triathletes competing against each other in the same race? The Digital Swiss 5 brings you exactly that on ROUVY! Learn everything about the race format, the most prominent male and female competitors and where you can follow the races live.

Athletes will compete in five digital races of about one hour each (the first four being lapped races) in Swiss cities. Each team is named by the respective host cities of Lucerne, Lugano, Lausanne, Basel and Zurich. With a maximum of six members, the teams consist of both male and female professional cyclists from various cycling disciplines and triathletes. Three riders from each of the teams will ride in the Saalsporthalle stadium (Zurich) on site. The others will race at home, spread all across the globe. One male and one female winner will be crowned per race. The overall ranking is awarded per team, whereby the fastest times of the first two males and the fastest female per team are combined in each race. Points are also up for grabs in KOM and intermediate sprint prizes, making for a well-rounded and exciting race format.

A number of top professional cyclists and triathletes will be lining up at the start. Marlen Reusser, Jason Osborne, Mauro Schmid and Hermann Pernsteiner, who were announced a week ago, will be joined by other well-known athletes. Following is an overview of these prominent names:

*The complete line-up as well as the team breakdown can be found at https://www.digital-swiss-5.ch/pro-race/

Most of all, the spirit of competition is present, as Marten van Riel says leading up to his first digital cycling event: "I love competing and I think that digital races are part of the future. My goal is to make the race exciting. I don't want to wait for a final sprint. I will give everything from the start". Hermann Pernsteiner is of the same opinion: "Of course I'll give everything, even though it might hurt a lot after the training break".

Parallel to the races in the Saalsporthalle, the open format amateur races will also take place digitally, where anyone around the globe is welcome to watch the inspirational efforts of the pros and enjoy the motivating vibe of the community.

The races will be broadcast on TV - SRF.CH/Sport (Switzerland only) and the following Youtube Channels online to watch for free:

Following is the schedule for the entire weekend:

Over the three days, five digital races will be held in five Swiss cities. From each team, three members will compete in the digital races in the Saalsporthalle Zurich, thanks to the support of the Zurich Sports Office, complete with Presenter, DJ and spectators! The races will be held on interactive indoor training rollers connected to the "ROUVY" platform. Amateur athletes can compete against the Pros in the Fan Races, held before the professional races. Further information at www.digital-swiss-5.ch