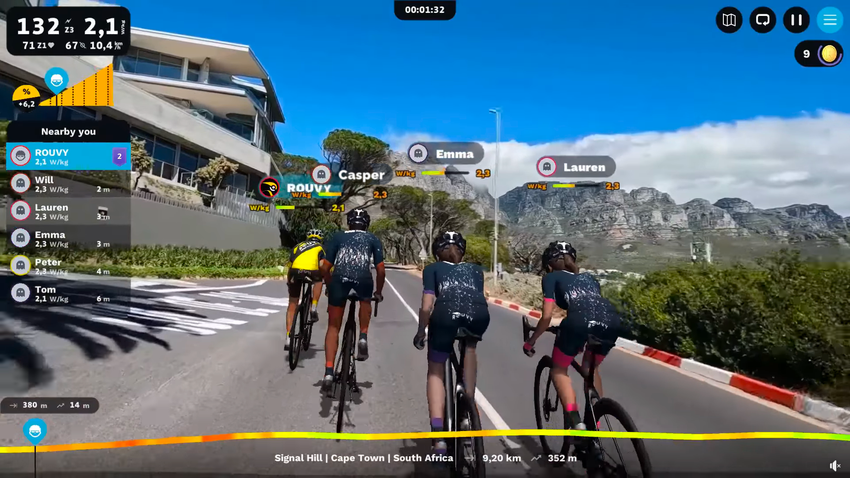 Prague, Czech Republic / ROUVY, a popular indoor training app, releases an update which introduces the advanced version of its virtual bots. Riders of all fitness levels, searching for added motivation and fun, can use this optional feature to always have the company of an equally performing team around their own avatar. The feature comes along with the improved functionality of the Unlimited Virtual Partners that enables simulation of the race or group ride of any scale, all based on real public record data.

ROUVY, is an application and platform that turns what was formerly known as mundane stationary training into a fun and motivating virtual adventure around the world. The overlaid 3D avatars and objects, atop the real-life geo-synced video footage, create a realistic augmented simulation of the outdoor environment. Initially, Ghosts were presented right with the first release of ROUVY AR back in 2018, but later on, due to the availability of ‘unlimited virtual partners’, the feature was put on hold for some time. Today, the team behind ROUVY rolls out the upgraded bots. Ghost riders are now part of all ROUVY’s AR rides, time-trials and workouts.

The Ghosts are generic but friendly, with names like Tom or Emily, or similar. The Ghost riders accompany the rider’s avatar and motivate for better performance. Oriented and adapted to one’s pace, bots are the Jungian shadows of one’s training individuality in some sense. Some of them stay behind, some in front (to motivate one to overtake) and some behave as your shadow. It’s possible to set the number of bots between 0-10. So, one will never have to ride alone until he or she wants to be the only king or queen of the road.

Improvement in selection of Virtual Partners

The latest app release also enables the selection of the best matching virtual partners. The sparring partner selection process now provides filters by the power to weight ratio (W/kg), time or username. Unlimited virtual partners are based on one’s own real data or other riders’ that have already ridden the route in the past (They can be combined with the personal bots). This way, it is possible to race against the visualization of your own multiple historic results preparing for a specific race or event. To appear on the leaderboard for the selection as a virtual partner, the ride has to be done in the ‘time trial’ or ‘race’ mode. The number of virtual partners is NOT limited, so it is up to an athlete to decide how many participants his training session is gonna have. Usually, it comes at a moment when the person realizes that it is time to stop clicking and start riding ;).

Vilem Samarek, Chief Product Officer @ ROUVY, states, “Riding with others is more fun, so we wanted to bring this functionality to make sure you never have to ride alone, no matter the route or workout you choose”.

Update of the app is needed for one to be able to spot the new features. Version 2.6.0 (or higher) is required. More details can be found here and descriptive visuals here.

ROUVY is a digital cycling platform for athletes all over the world to compete, ride with friends, complete workouts, and do much more. ROUVY offers thousands of exciting virtual routes and workout options including the ability to race and ride through the almost unlimited route catalogue. With fully simulated and realistic efforts, ROUVY is the best option for both the casual rider and the most highly trained and fit athlete. On ROUVY, riders can achieve their own individual goals, and find training fulfillment while keeping it just as realistic indoors as it is outside. rouvy.com