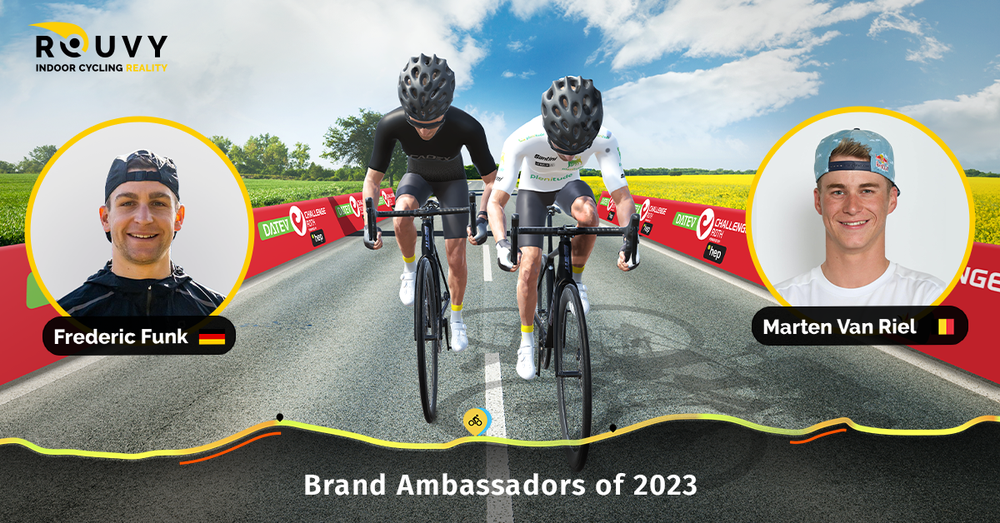 Prague, Czech Republic / ROUVY, the augmented cycling and triathlon platform, announces the addition of the mid-distance triathlon European champion, Frederic Funk and Belgian National Champion, Marten Van Riel to its team of brand ambassadors. The athletic community around the world can soon expect to ride and race together with both of them on ROUVY.

Whether one’s goal is just to stay fit or to make the next race podium, ROUVY’s unique virtual racing platform is there to make the training process fun and engaging. With thousands of popular cycling and tri spots around the world, ROUVY makes at-home training as realistic and rewarding as in the outdoors, turning mundane training into an adventure of world discovery. ROUVY is planning to onboard several prominent stars throughout 2023. Frederic and Marten are the first to join and both athletes already do much of their power training indoors. With many sprint, mid and long-distance race courses on ROUVY, athletes of any level can simulate and match their key races in the season with 1:1 precision. With features like Strava Live Segments, thousands of available workouts and TrainingPeaks integration, ROUVY provides a complete toolset for any demanding athlete.

Frederic Funk is a professional triathlete from Germany with over a decade of experience in the sport. He is a multiple-time national champion and has competed in numerous international events winning several IRONMAN 70.3 events and making top 5 in IRONMAN 70.3 World Championships in St. George. His Challenge Family wins include a European Champion title, 2 x Challenge Walchsee-Kaiserwinkl, Challenge Peguera-Mallorca and Challenge St. Pölten. He says, “My priorities for 2023 will be the highest ranked world stage races attracting the best athletes in the world: PTO Opens, PTO Collins Cup, IRONMAN 70.3 World Championship (already qualified for) and Challenge The Championship (already qualified). And I am going to use all the ROUVY app features to the fullest to be ready for them in the best possible shape. Setting or chasing some of my own PRs or records on Strava Live Segments on ROUVY promises to be fun”.

Marten Van Riel is a professional triathlete from Belgium. He is known for his impressive performances in middle-distance triathlons, and has a passion for cycling. Marten won the IRONMAN 70.3 Dubai in 2022 and was 2nd in the 2021 World Triathlon Championship Finals in Edmonton. Marten Van Riel adds, “I am excited to join the ROUVY community and help promote the benefits of indoor training. ROUVY will be a key part of my training routine, and I'm thrilled to be able to lead the rides and races on real race routes and interact with other athletes around the globe, whether they're just starting out or are seasoned pros".

The team @ ROUVY is excited to welcome Marten and Frederic to the ‘Ambassador Team’ and looks forward to working with them to inspire and motivate more athletes to get ready for races all year round. Marten’s very first official Group Ride on ROUVY will take place in Wanaka New Zealand on Friday, the 20th of January at 19:00 CET.

The schedule of all ROUVY events is available here.

ROUVY is a leading virtual cycling platform, offering the opportunity to ride and train on virtual roads from around the world and ride in famous cycling and triathlon events from home. Since 2022, ROUVY has been an official partner of Challenge Family, and today offers its 36 beautiful locations in which the races are hosted. With a nearly endless catalogue of real route videos and workouts, ROUVY helps athletes of all levels reach their athletic goals. www.rouvy.com