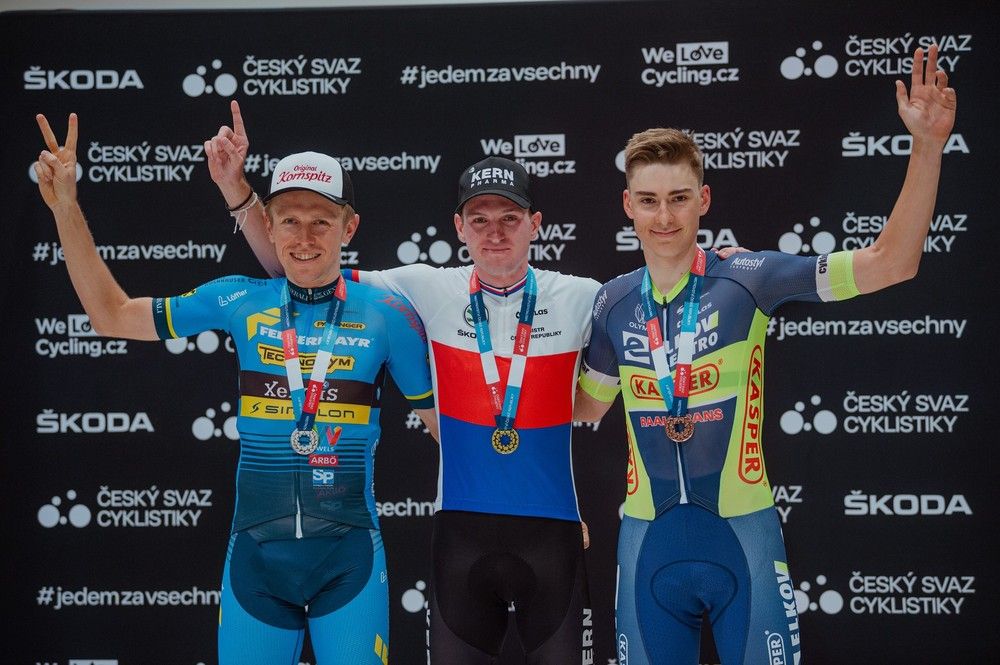 Prague, Czech Republic / March 25, 2022 - Vojtěch Řepa from the Spanish team, Equipo Kern Pharma and Eliška Kvasničková from SportRaces became the champions of the Czech Republic in virtual cycling hosted on ROUVY. Titles in the elite categories ŠKODA eMČR 2022 were fought for in a joint race in the AUTO OPAT Showroom in Nupaky near Prague on March 22nd. Milan Kadlec from Dukla Prague became the junior champion of the Republic.

The second year of the broadcasted domestic e-cycling Championships took place on a part of the route of the Czech road classic, Velká Bíteš-Brno-Velká Bíteš; the 45th year of the real race is waiting for cyclists this Sunday. In the battle on trainers, the riders covered the 36.5 km segment of the course. Hobby cyclists from all over the world were able to race along with the Czech pros at the same time (but for a separate leaderboard) from home.

Řepa, who lives in Velká Bíteš, just 200m away from the race start location, used the knowledge of the "home" environment to his advantage in the virtual race. "On the day of the race I was riding the route in real life and I think it helped a bit. I know almost every place there and I'm glad I managed to win," said the new champion, who improved the existing record on the ROUVY route leaderboard by 6 minutes.

Last year's champion Daniel Turek, who defends the colors of the Austrian team Felbermayr Simplon Wels, finished second this time. "Vojta was the strongest of us in the decisive climb and he deservedly won. I tried to take at least the second place in the spurt. It was a lot about experience and right timing and it worked out well for me," admitted Turek.

"Vojta Řepa passed us on the hill; we didn't have enough for him. Unfortunately, I was making little mistakes in the spurt because I went for it later. But otherwise, it was nice and I'm already looking forward to the real Bíteš race," said the bronze winner, Filip Řeha from home squad Elkov Kasper.

Eliška Kvasničková won the title in the women's category in a supreme way which is obviously a testimony of her calibre. In this year's Visegrad 4 e-CUP series, she finished second overall and in the Championship race she literally outclassed her opponents. Right from the climb on Bíteš, she became the sole independent rider at the head and was steadily increasing her lead to the very finish gate.

ROUVY is an interactive cycling platform to explore the world from home and compete with friends for fun. There are several thousands of stunning routes on offer with the official races of La Vuelta, Tour de Suisse, Challenge Family and other numerous premium-class events from all over the world. www.rouvy.com