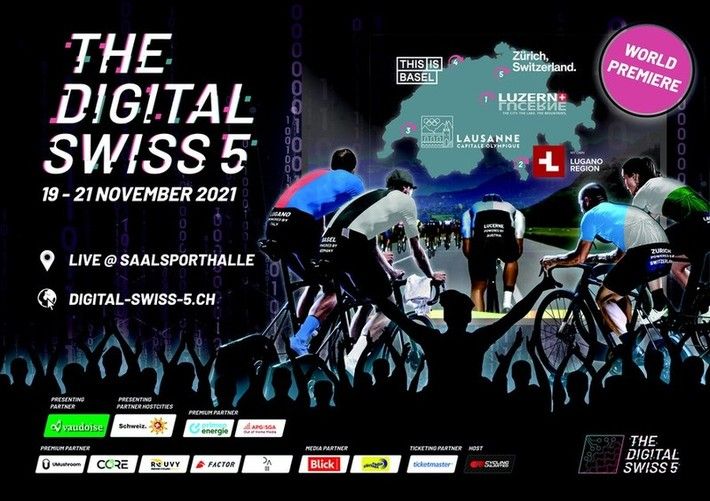 Zurich, Switzerland / November 12, 2021 - This World Premiere will see national and international cycling and triathlon stars go head to head from 19th - 21st November 2021 in Zurich's Saalsporthalle and online around the world. The field of riders is taking shape.

The current European Champion and Olympic silver medallist in the time trial, Marlen Reusser, will fight for every second at The Digital Swiss 5. “I am looking forward to competing in The Digital Swiss 5 together with different athletes in a cross-gender challenge.” With her uplifting and outstanding performances last season, she is a force to be reckoned with in the upcoming Digital Cycling World Premiere. In addition to the Swiss Time Trial rocket, this year's stage winner at the Giro d'Italia, Mauro Schmid, will also be pedalling in the Saalsporthalle Zurich. The 21-year-old is looking forward to participating and is excited by the hybrid format: "You can compete from anywhere against anyone. I hope my form is still good enough after the long season so that I can deliver a strong performance." There is no doubt he will be able to convert his track cycling experience into results on the roller trainer.

Naturally the starting field is also studded with international athletes. One such participant is the UCI World eSports Champion, Jason Osborne. At the first event in December 2020, the champion rower (silver medallist in the lightweight double sculls in Tokyo) upset the entire cycling elite. Without a doubt he is a digital cycling specialist. As well, Austria's Hermann Pernsteiner will be taking part. He drew attention to himself with a TOP 10 ranking at this year's Giro d'Italia and has the following to say about his sporting ambitions at The Digital Swiss 5: "Of course I'll give everything, even though it might hurt a lot after the training break." There will also be many international triathletes at the start to challenge themselves against the cycling Pros.

Over the three days, five digital races will be held in five Swiss cities. The mostly flat or slightly undulating routes lead through the cities over several laps and take about an hour to complete. From each team, three members will compete in the digital races in the Saalsporthalle Zurich, thanks to the support of the Zurich Sports Office, complete with Presenter, DJ and spectators! Other athletes from each team will participate from home. The races will be held on interactive indoor training rollers connected to the "ROUVY" platform. Ambitious amateur athletes can compete against the Pros in the Fan Races, held before the professional races. "The race series has been further developed in all areas and now provides new opportunities for the riders and thus more excitement for spectators on site and via the screen," says Joko Vogel. The event will be broadcast nationally by SRF and internationally by various TV stations and will be supported by major media partners. Further information at *[https://www.digital-swiss-5.ch/](https://www.digital-swiss-5.ch/ *