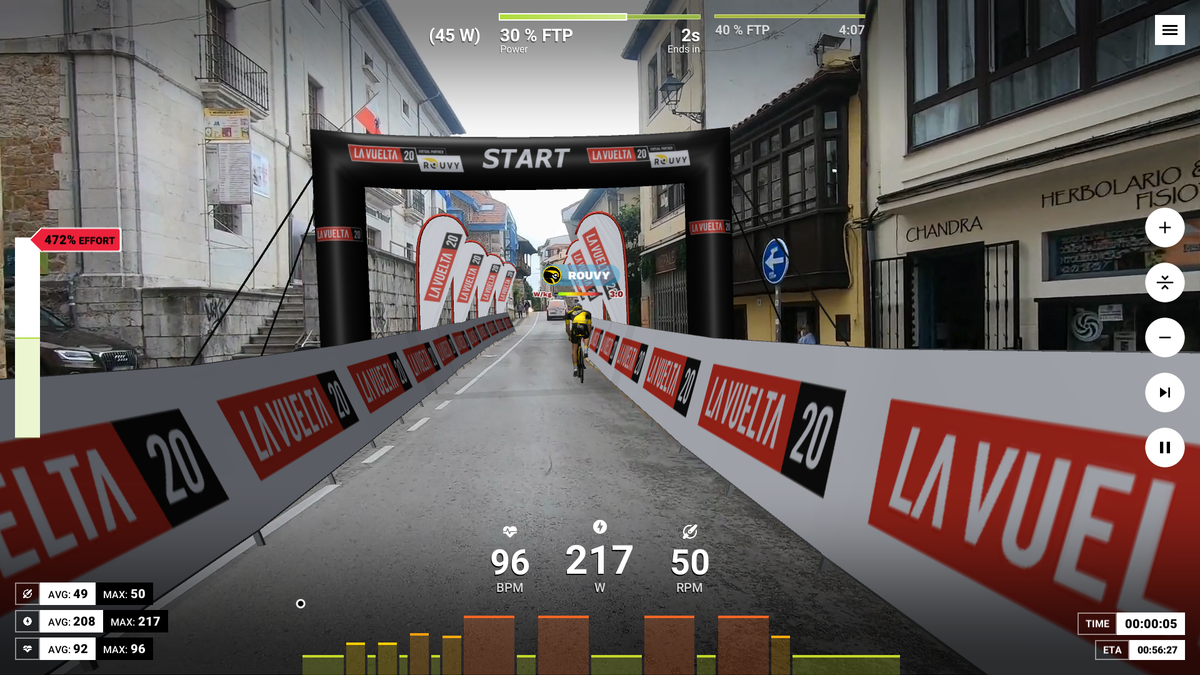 ROUVY is a well known and popular indoor app that enables cyclists and triathletes to ride anywhere in the world from home, be it an exotic or iconic cycling location or the next race. Less talked about is the number of features and the other training options of the platform. As of today, ROUVY’s workout catalogue (not to mistake it with the ‘route catalogue’) has an extensive folder with numerous structured workouts, which has always contained excellent ERG training options. Such extensive libraries provide the much-needed training content to fulfil any individual or team training plan, and for the most demanding athletes and coaches.

Traditional structured training, though very efficient, used to be a laborious and boring exercise. The person taking on a home or gym interval (or even a casual spin class), needed a strong mindset and sometimes ‘motivational support’ to finish the workout session. ‘Motivational support’ came in the classic form of yelling instructors, stern coaches, watching TV or at least the presence of others suffering in the same room. Today, ROUVY provides an alternative to replace this stressful environment with a much more engaging option. While completing a structured workout an athlete is able to choose any part of the world for the virtual visit, be it a legendary cycling spot or the next race location for mental preparation.

While performing ERG workouts, athletes are able to see the performance of their avatars over the specific course simulation, turning a mundane prescribed training routine into a real-time, cycling adventure. Detailed instructions on how to use the new features are provided here.

Today ROUVY provides 500 famous and iconic cycling locations in the augmented mode allowing for racing and group riding, and around 10,000 video routes for individual exploration or race recon. Complemented with 10,000 workout options and more than 60 official race partners, ROUVY makes the top of the list of the most complete platforms to go to for an indoor session.

With an all-in-one solution and “Family” option (two more household members on 1 subscription) ROUVY provides the best value for money on the market. Competitive advantage is gained via the unique mix of efficient structured training, real-life video, interactive 3D world elements and events to keep athletes motivated all year long.

The updated and extended ROUVY workout catalogue can be accessed in ‘search’ here, and the iconic locations all over the world can be explored here.

Divided into two apps after the release of ‘ROUVY AR’ in 2018, this app update now completes the evolution of merging and unifying ROUVY Workouts into ROUVY AR as a single ‘ROUVY’ app. The ROUVY Workouts app is getting set into a deprecation mode; and functioning of these apps will be eventually discontinued. A fraction of riders whose legacy trainers or sensors may not be compatible with ‘ROUVY’ will be provided with a discount from ROUVY partners and encouraged to acquire more modern equipment.

ROUVY is a digital platform that enables athletes to cycle and run for fun with friends online and virtually all around the world. The application simulates real outdoor riding on a bike using high-quality, geo-located videos and augmented reality. With ROUVY, anyone can enjoy the endless variety of legendary and exotic locations from the comfort of one’s home. Today, ROUVY is an official partner of the elite cycling races, all over the globe, such as La Vuelta, Tour de Suisse, IRONMAN and many others. www.rouvy.com