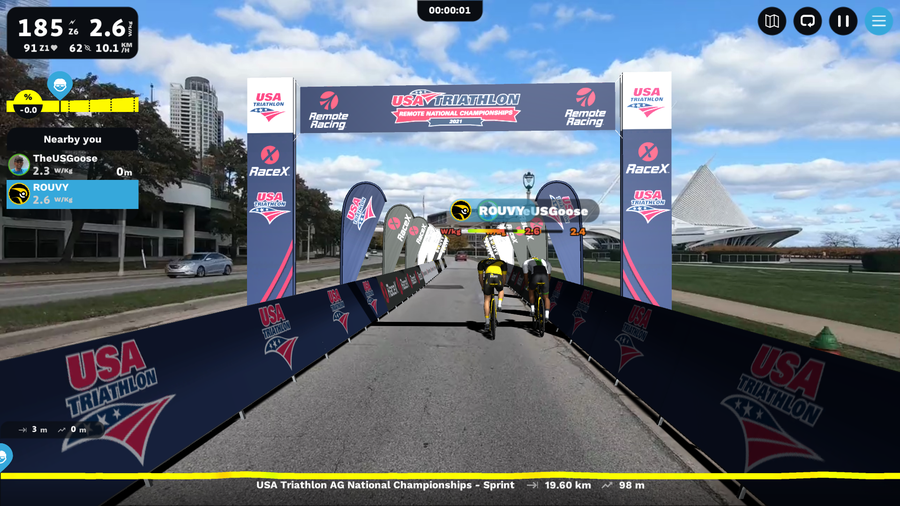 With no qualification required, the USA Triathlon Remote National Championships is a great opportunity for the US-based triathletes of all types, from competitive to casual, to add fun, variety and purpose to their training and enable them to see how they stack up in advance of the 2022 event in Milwaukee. Additionally, the newcomers unfamiliar with the location and global triathlon community around the world have a chance to recon and race with friends the ‘just-released’ bike courses on ROUVY from home. The energy and excitement of the multisport community at the Toyota USA Triathlon Age Group National Championships in Milwaukee this past August was unmatched and the Remote National Championships is bringing that spirit to all people across the country and beyond.

For the consistency of results swims must be done in standard-length pools. The bike segment may be completed indoors or outdoors either with or without a bike power sensor. On ROUVY, the bike course, 25-mile Olympic or 12-mile Sprint version, can be done with the realistic 1:1 augmented video, free of charge for the remote championship competitors. The run must be done outdoors.

Predictive Fitness, the company behind RemoteRacing™, uses patents-pending EnviroNorm® technology and the Equalizer™ to normalize participant results based on their remote environment and terrain, localize racing environments to simulate onsite race outcomes, and create a level playing field for all participants by adjusting individual performances to account for the physiological differences due to age and gender. RemoteRacing’s use of advanced technology and a well-thought-out set of rules adds a new and unique dynamic. Differences in courses and environment are all accounted for, as well as numerous methods for detecting abnormalities to prevent cheating.

The USA Triathlon Remote National Championships will feature both a USA Triathlon Club competition and Collegiate Team competition. The innovative scoring model factors in age, gender, team size, and race size giving all athletes the same opportunity to meaningfully contribute to their team’s score. The RemoteRacing method allows entire teams to participate without the travel and expense. Teams can coordinate their own race-day festivities with finish lines and post-race parties with family and friends.

For the athletes registering now, the entry is $50, and will include an exclusive finisher’s medal and an additional 30-day free trial on ROUVY. Certified Coaches and members of Certified Clubs receive a discount on registration.

Awards will be given in the following categories:

Additionally, all registrants will be eligible to receive prizes from Wahoo Fitness.

ButcherBox is a supporting partner of the Remote National Championships. A portion of the proceeds will support USA Triathlon Foundation’s mission to transform lives through sport by opening pathways for all to swim, bike, and run.

Register for the Remote National Championships by the end of the day on Tuesday, November 16th, and engage with fellow athletes throughout the championships on social media using #USATRNC. The event’s race window is open from November 11th-21st. Athletes must complete all three legs within the race window and activities must be done in swim-bike-run order.

ROUVY is a digital racing platform for athletes all over the world to compete, to ride or run with friends, complete workouts, and much more. ROUVY offers over 10,000 filmed geo-synced routes and 10,000 workout options including the ability to race or workout over the entire route catalogue from home. With fully simulated and realistic efforts ROUVY is the best option for the most demanding athletes to be race-day ready.

USA Triathlon is proud to serve as the National Governing Body for triathlon, as well as duathlon, aquathlon, aquabike, winter triathlon, off-road triathlon, paratriathlon, and indoor and virtual multisport events in the United States. Founded in 1982, USA Triathlon sanctions more than 4,000 events and connects with more than 400,000 members each year, making it the largest multisport organization in the world. In addition to its work at the grassroots level with athletes, coaches, and race directors — as well as the USA Triathlon Foundation — USA Triathlon provides leadership and support to elite athletes competing at international events, including World Triathlon Championships, Pan American Games and the Olympic and Paralympic Games. USA Triathlon is a proud member of World Triathlon and the United States Olympic & Paralympic Committee (USOPC).

To donate to the USA Triathlon Foundation, or to learn more about the foundation and the programs it supports, visit usatriathlonfoundation.org.