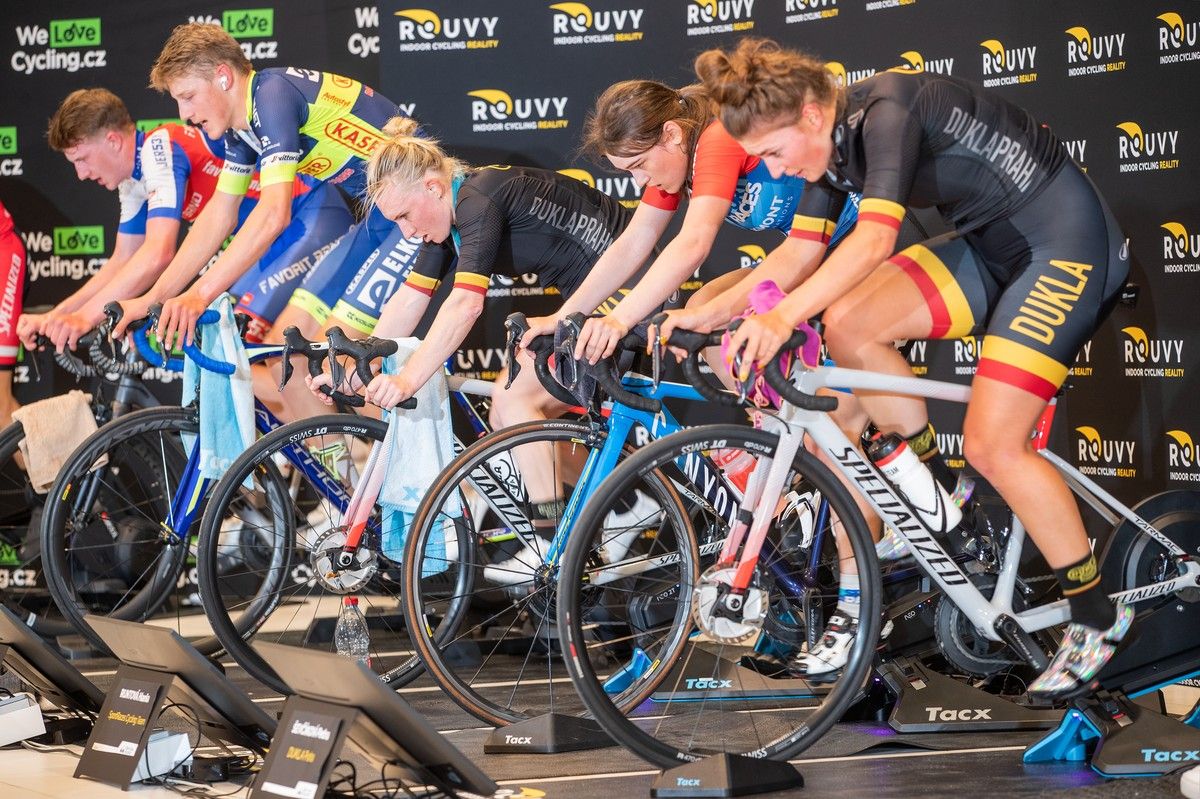 Prague, Czech Republic / January 5, 2022 - The Czech championship series of open virtual cycling races on ROUVY, which premiered in 2021, has officially been upgraded to an international level. Starting Jan 11, it will run for the first time as the ‘Visegrad 4 eCUP’. The series will be historically the first dedicated and open European cycling cup in eSports - presented by corresponding cycling federations, and held across 4 countries: Czech Republic, Slovakia, Poland and Hungary.

The series will have a total of four races and, just like last year, the national championship of Czech Republic - ŠKODA eMČR - will take place beyond these. Anyone from the international cycling community is welcome to join in and enjoy racing against the best PRO riders from the Czech Republic, Poland, Hungary and Slovakia.

"This year we managed to elevate the entire series to an international level. We approached the federations that organize the Visegrad Four races on the road, and everyone liked the idea of ​​virtual races very much. The agreement was reached quickly and each race will be run under the patronage of the country," said the president of the Czech Cycling Federation (CCF), Petr Marek.

Although foreign cyclists have already taken part in races on the ROUVY platform in 2021, a much larger and more well known international peloton is now awaited.

"It will be much more attractive for professionals and amateur riders, because they can match themselves against really great and qualitative international competition. Virtual races are gaining more and more popularity especially during this period, and for cyclists it is also a good form of training in bad weather. Last but not least, there is also the tension of competition," added Michal Kramer, CCF's marketing director.

For the hobby cyclists category, the CCF has also prepared a New Year's gift in the form of free voucher codes for subscriptions to the ROUVY application. "And to motivate amateur racers even more, the two best hobby riders from the ‘Visegrad 4 eCup’ series will have the opportunity to start alongside selected professionals at the national championship, where all the best will be physically present and ride in one place." said Kramer.

Virtual cycling races are gaining more and more fans even among professionals. "As part of the winter program, it is sometimes a good form of training and diversification, especially for road racers. I can choose the course profile I want and I will have an excellent workout. Personally, I prefer to get on the trainer in bad weather than be outside, and I also enjoy technology a lot, so I'm a fan of virtual races," said Daniel Turek, the pro from the Austrian Felbermayr Simplon Wels team, who became the country's premier virtual race champion.

"Great to see it turning into an international race series. Virtual races are almost becoming a regular cycling discipline. Many guys have found it convenient and beneficial, especially in the winter, and I don't consider it in any way inferior to conventional training. I appreciate the title of Champion of the Republic, although I certainly do not take it as the best result in the season. But it is still the champion's jersey and I will definitely want to defend it," added Turek.

Broadcast: Live streams will be available on ROUVY Youtube Channel and CCF Facebook page. The stream will be commented on by Tomas Jilek and Martin Hacecky.

The Czech Cycling Federation has already created a special website (in Czech) for the Visegrad 4 eCUP and ŠKODA eMČR series, which contains important information, conditions of participation and also registration.

International athletes are welcome to register here. (Comprehensive rules in English are here.)

ROUVY is a digital platform for athletes all over the world to compete, ride with friends for fun, do workouts and much more. ROUVY offers thousands of virtual locations and training options, including the chance to take part in races and cycle through the entire route catalogue. Thanks to a simulated but completely realistic riding experience, ROUVY is undoubtedly the most suitable option for the ambitious and toughest athletes to prepare for their next race day. www.rouvy.com.