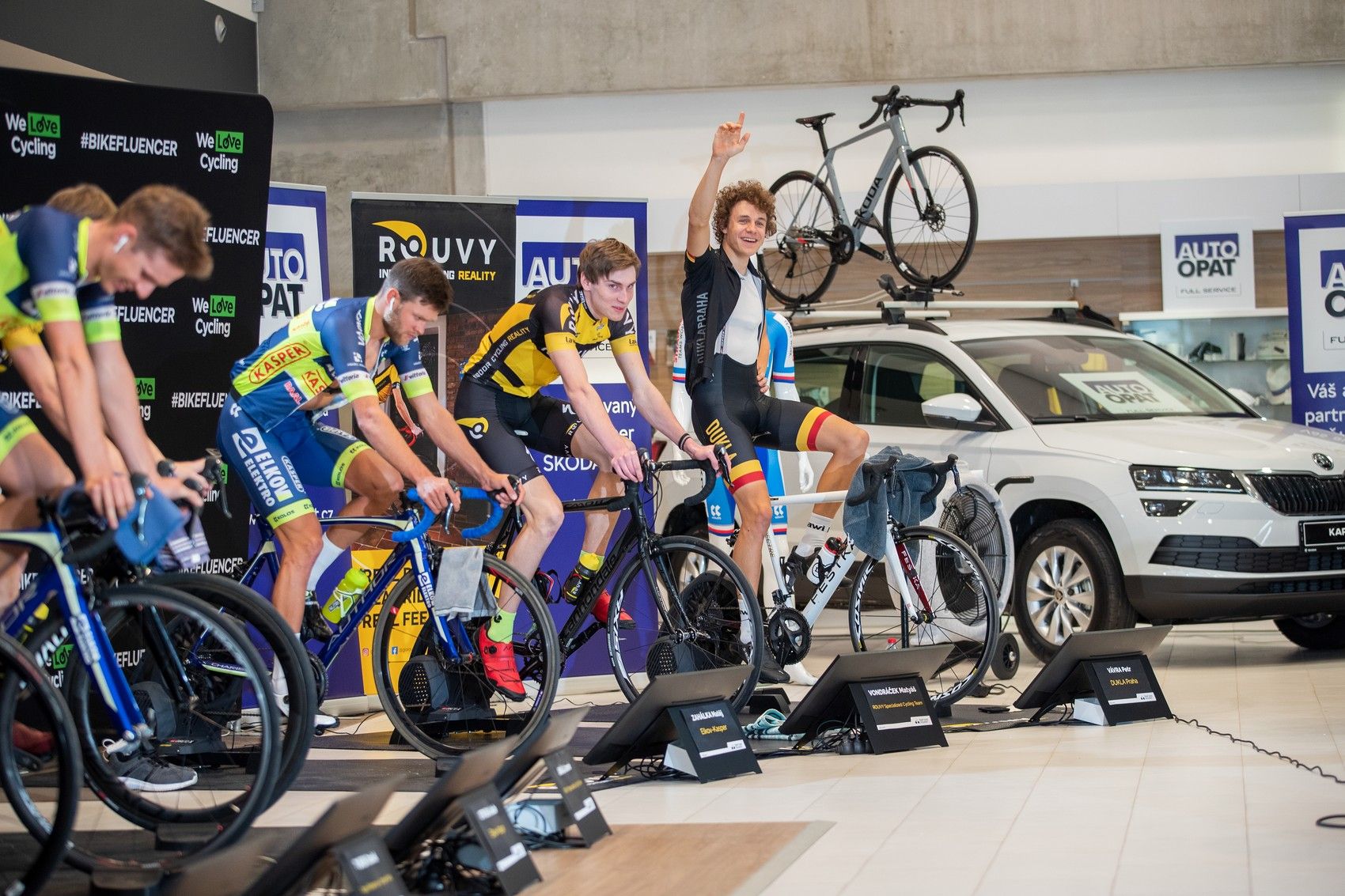 Prague, Czech Republic / For the second time on the domestic scene, licensed professionals will compete for titles in virtual cycling on ROUVY. The ŠKODA eMČR 2022 will take place next week, on March 22, from 6 pm to 8 pm in the AUTO OPAT Showroom in Nupaky near Prague. Casual riders can join the event online and race with the Czech cycling stars who will fight for the titles of National Champions.

Last year, the premiere of the virtual cycling championships took place; this year, the four-part international series, Visegrad 4 e-CUP was added. Everything will now culminate in the second fight for Czech titles within the ŠKODA eMČR.

Last year, Daniel Turek and Martina Sáblíková won the 2021 titles. This year, Turek won one of the Visegrad 4 e-CUP races, namely the Slovak GP; he will strive for the title of Champion of the Republic, this year as well. "Virtual races are becoming an almost regular cycling discipline. Many guys are racing virtually in the winter and I am completely fine with it. I appreciate the title of National Champion and I will definitely want to defend it," said Daniel Turek, the pro from the Austrian Felbermayr-Simplon Wels team.

Vojtěch Řepa, a member of the Spanish team Equipo Kern Pharma, who won the GP of the Czech Republic in January, the introductory part of Visegrad 4 e-CUP has also confirmed his participation. The domestic best stable of Elkov Kasper will be represented by Tomáš Obdržálek and Filip Řeha. The overall winner of the Visegrad 4 e-CUP junior category, Milan Kadlec (Dukla Prague), who was last year's junior European champion, will be there too. Another great contender at the start is Radovan Štec (Tufo Pardus Prostějov), who won the omnium title among the juniors at the World Championships in Egypt in 2021 and added silver in the scoring nomination and madison. Eliška Kvasničková will definitely be one of the big favorites in the fight for the championship jersey among women. The SportRaces’ female rider finished second overall in the Visegrad 4 e-CUP 2022 series.

"Sound names of professionals are not missing this year either, but a novelty compared to last year will be the start of the two best riders in the ‘Amateur’ category, i.e. the best man and woman who do not have a CCF racing license. They will start and compete alongside the same leaderboard with real professionals; a completely unprecedented experience awaits them. The Czech Cycling Federation strives to connect professional cycling with the general public in this way as well,” said Petr Marek, President of the Czech Cycling Federation.

"We are very happy that the interest in sports competitions has not abated and we are also pleased with the growing involvement of women. We are enthusiastically watching the growing interest in races, in which the best of hobby cyclists can join the ranks of professionals. The indoor season is still in full swing and this championship opens up another opportunity to experience something new," says one of the founders and CEO of ROUVY, Petr Samek.

The ŠKODA eMČR will take place on a segment of the Czech spring road classic Velká Bíteš-Brno-Velká Bíteš. There will be a total of three championship jerseys for the best to grab: Men / U23, juniors and women/juniors. In total, up to 20 selected competitors should fight for titles in-person in the Auto Opat Showroom. They will ride on the same type of trainers, which will be calibrated and set to the exact weight parameters of the nominees, so that everything takes place according to UCI rules for e-sports. The race will be streamed live on the ROUVY YouTube channel and will also be broadcast by the Czech Television as part of the HbbTV / www broadcast.

Anyone (who has a smart trainer) can take part in the ŠKODA eMČR grand final and race together with the Czech stars (competing for the title of National Champion) on the same track and at the same time.

ROUVY is an interactive cycling platform to explore the world from home and compete for fun. There are several thousands of stunning routes on offer with the official races of La Vuelta, Tour de Suisse, Challenge Family and other numerous premium-class events from all over the world. www.rouvy.com