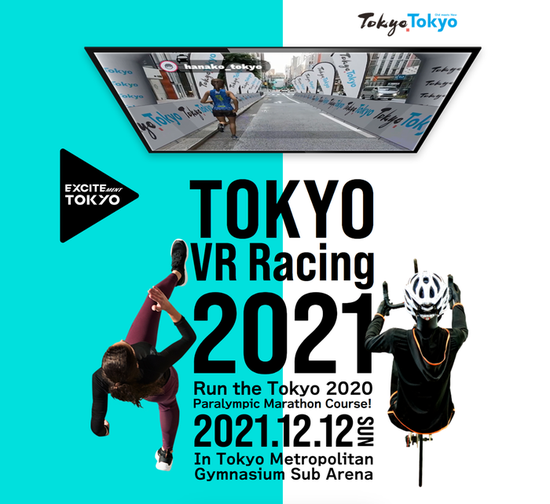 Tokyo, Japan / December 9th, 2021 - The Tokyo Metropolitan Government is hosting the “TOKYO VR racing 2021” day on December 12th, on ROUVY. Building on the momentum of Olympic and Paralympic Games TOKYO 2020, the host city presents the realistic augmented ride & run courses to the global athletic community. The amazing downtown of Tokyo was digitized and is now available, for virtual experience and events, to any fitness enthusiast on the planet. Everyone is invited to join any of the 5 Bike races or the 5 Run races in Tokyo, this Sunday, just from the comfort of one’s home.

Tokyo Metropolitan Government (TMG) uses ROUVY's digital technology to recreate the marathon course of Tokyo 2020 Paralympics Games in virtual reality (VR). This enables athletes and visitors to experience a new kind of fun in sports and enjoy the tourist attractions of Tokyo in a new and beneficial way. With “Tokyo Tokyo Old meets New”, TMG demonstrates its exemplary approach of preserving the city’s prominent heritage and at the same time bringing it to its futuristic destination.

This course is based on the Tokyo 2020 Paralympics Marathon course and is a wonderful journey through the streets amidst the impressive modern architecture of Japan's capital.

The routes have been published and can be found in the ‘running’ section of the ROUVY app, and also in the cycling ‘Cities’ catalog folder of the same.

In addition to all VR events, 2 of them will be hosted in person at the main venue, the Tokyo Metropolitan Gymnasium Sub Arena, as guest stage events:

As for the prizes, the top three on-site finishers will receive a trophy and the original Tokyo Omiyage (Tokyo souvenir).

The on-site races will be streamed live on TOKYO VR Racing 2021 - YouTube in ※Japanese only. The broadcast will start 15 mins before the start of the onsite races.

The online broadcast will be done by the former professional road rider and Olympian, Takashi Miyazawa, a member of the Saxo Bank team, and the Nagano Winter Paralympics and Athens Summer Paralympics gold medalist, Wakako Tsuchida, who will appear as race commentators. Other popular Japanese TV celebrities and YouTube bloggers will also participate in the race!

Registration is free and open for anyone HERE.

Tokyo is the capital of Japan where the Tokyo 2020 Olympic and Paralympic Games were held in 2021. It is also the center of Japan in terms of culture (newspapers, broadcasting, publishing, etc.) and education (universities, research institutions, etc.). It is an international metropolis with one of the largest populations in the world and is also Japan’s transportation center. www.metro.tokyo.lg.jp

ROUVY is an AR platform developed in the Czech Republic with hundreds of thousands of members around the world. ROUVY offers thousands of exciting virtual roads to join the pro peloton online or compete with friends. Combining 3D animations with real geolocated videos, ROUVY makes home training both realistic and fun. Fitness enthusiasts and the most demanding athletes are welcome to cycle and run the world from home. For the athletes of any level it is the most exciting way to stay fit or get ready for the next competition! www.rouvy.com