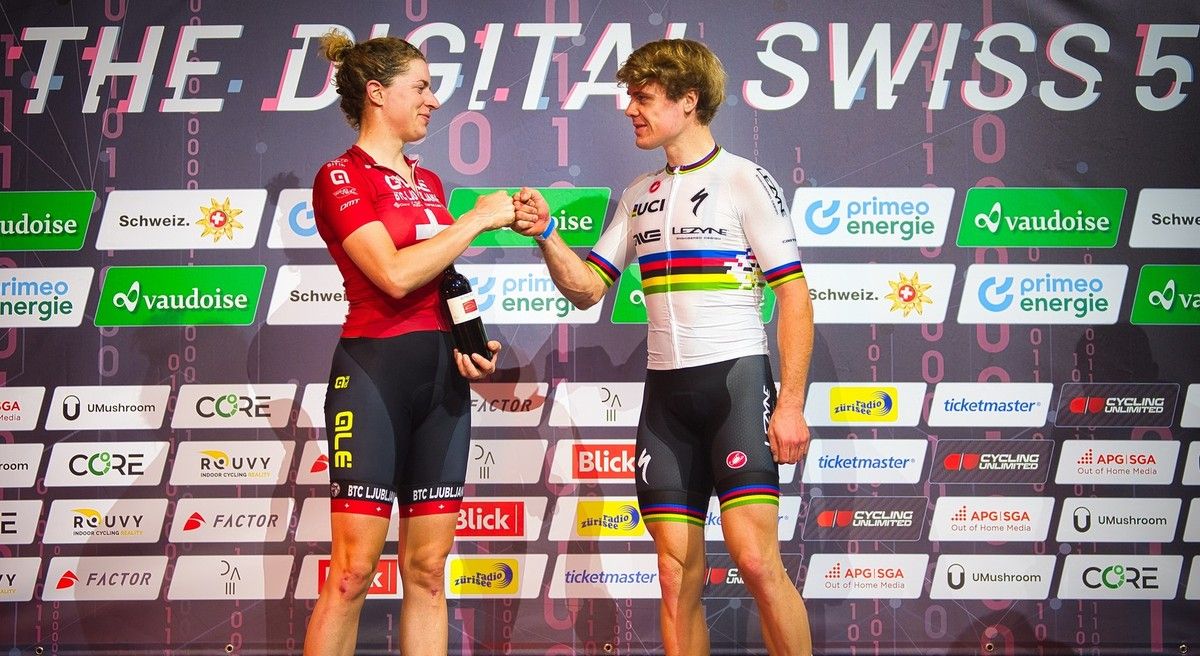 Race Day 1 - The favourites were victorious

Marlen Reusser and Jason Osborne lived up to their roles as favourites. The Olympic individual time trial silver medallist and the e-sports world champion won the first race of The Digital Swiss 5 in Lucerne.

Four laps were raced through the centre of Lucerne at full throttle without interruption. Right from the start, it was an e-cyclist and rower Osborne and Swiss champion Reusser who provided the leading tempo and winning formula on the virtual platform ROUVY. It was not only on site in the Saalsporthalle that the sweat flowed. Switzerland's Reto Hollenstein rode his race for Team Zurich from home and was no less at his limit!

With the pumping beats of the DJ, the riders pushed to their limits. Despite their full efforts, even this year's stage winner at the Tour de Suisse, Gino Mäder, was not able to beat Osborne's unchallenged victory. Only a few minutes later the e-sports specialist, Marlen Reusser crossed the finish line with a gap of about three minutes to her nearest female competitor.

In the team classification, however, Team Lugano with Hermann Pernsteiner from Austria, who finished tenth overall in the Giro, is leading. It will be exciting to see if they can defend this top position in the next races.

In the first race of the day, a group of four was in the lead for a long time, but in the evening race only Thomas Steger was able to keep up with Jason Osborne. In the end, however, it was once again the e-sports world champion in both races who was able to push the highest watts and power and bring home the victory. The climbers were as a result unable to keep up with the high power riders on these relatively flat courses.

In the evening, the sprint for third place turned out to be extremely exciting, with Mauro Schmid winning with all he had, beating the very consistent Hermann Pernsteiner by a narrow margin It was a sweaty affair both for the riders in the Saalsporthalle and for those pedalling at home.

The European time trial champion Marlen Reusser showed that she is also strong over the digital terrain in Lugano and Lausanne. She took three minutes and more off her competitors. Like Osborne, she was able to claim her third victory in the third race. Find out in this spot more about what she likes about the camaraderie amongst her fellow athletes.

With the final races in Basel and Zurich today, it means one more chance to push to the max. Team Lugano also has to defend its first place in the overall ranking.

Also on the last day of The Digital Swiss 5, Jason Osborne and Marlen Reusser lived up to their roles as favourites. Despite tough opposition from their competitors, they also prevailed in the races in Basel and Zurich.

In the first race around the Rhine in picturesque Basel, Marlen Reusser was able to stay in the men’s leading group for a long time and hold her position. The flat course certainly suited Reusser. It was fantastic how she stood up to her male colleagues! In the last third of the race, Osborne and Stein were able to break away from the leading group. For a long time it looked like a close race. In the end it was again a strong attack by Jason Osborne which secured him the victory. Team Zurich with Gino Mäder, Marlen Reusser and Adrien Briffod sprinted against each other for 10th place. The resulting 11th place in this sprint for European time trial champion Reusser was equivalent to another victory in the women's category.

Before the final race in Zurich, the team ranking presented an exciting starting position. Could Team Lugano still be caught up? In the men's individual category, Thomas Steger, who had been racing from home, was able to keep up with Osborne for a long time. But in the last 10 kilometres, the neo-professional cyclist once again pulled away impressively. The women's race was exciting for the duration of the event. Until the end it was a fight between Mavi Garcia from Spain and Marlen Reusser, team mates in real road cycling and competitors in the digital cycling world. In the end, Reusser was able to raise her hands to the sky once again and enjoy her fifth victory in the fifth race, In the same way as the e-sports world champion in cycling, Jason Osborne had just done.

Team Lugano did not miss a beat in the last race and won ahead of Team Basel. However, the lead was only seven points at the end. Great digital cycling with impressive real efforts has been shown on the last day in the buzzing Saalsporthalle!

Over the three days, five digital races of the 2021 edition were held in five Swiss cities. The hybrid format mixed the pro athletes from the road, triathlon and other disciplines. Each team had representatives on-site in the Saalsporthalle Zurich, with part of the teams joining from home. The races were hosted on the "ROUVY" platform with a commentator, presenter, DJ and spectators! Additionally, around 500 athletes from all over the world raced just before the pro race in their community series edition. All overall individual and team standings are available at https://www.digital-swiss-5.ch/