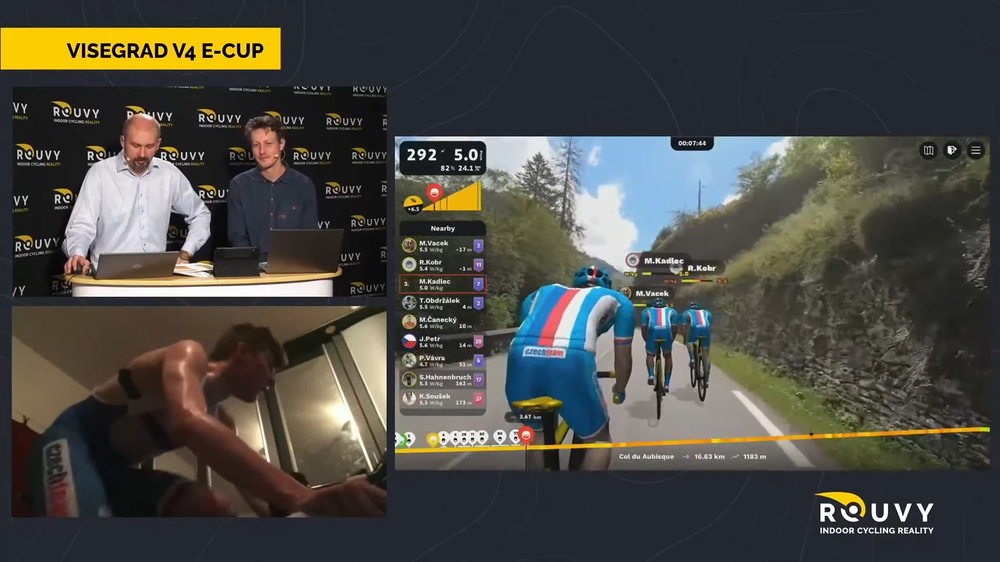 Prague, Czech Republic / March 10, 2022 - The Central European ‘Visegrad 4 eCUP’ on ROUVY, organized by the cycling federations of the Czech Republic, Slovakia, Poland and Hungary is over. The first ever dedicated and open European cycling cup in eSports, initially aimed across 4 countries, has now seen the registration of around 2,500 athletes from 40 countries.

The series, with a total of 4 races and broadcasts, was a great success seeing 2,426 registrations with 838 riders finishing all the races. What was proposed only for the Central European region has now grown to an amazing geographic coverage of 40 countries from all continents. Each race has seen over 500 riders per event who enjoyed the hot battles among themselves and made it both great fun to race and watch with others.

The video recap of the V4 series is here.

Taking place every other 2 weeks, the series has seen the 1st Slovak Virtual Cycling Championship, backed by ELITE Cycling in between, with the 2022 Virtual Cycling Championships of the Czech Republic - ŠKODA eMČR coming soon. The Czech Cycling Federation was the coordinating force with the other federations, while ROUVY was covering the backstage production and technical side.

Community riders were racing from home ‘wheel-to-wheel’/avatar-to-avatar against the best PRO riders from the Czech Republic, Poland, Hungary and Slovakia who were showing impressive watt performance in average numbers and drafting skills. The brightest highlights are below:

The Men/U23 Elite categories and the Women ELITE/Juniors had 124 and 23 riders respectively. All the series results for the U23 Category are here.

The race-specific results are available here for CZ, SK, POL and HU. The recorded race live streams are available on ROUVY Youtube Channel, which were commentated by Tomas Jilek and Martin Hacecky. Thanks to all participants!

Chosen best amateur V4 riders will be racing shoulder-to-shoulder in the official ŠKODA eMCR Czech National Championships Finals in Virtual Cycling on March 22nd, in Prague. Details are to be revealed next week.

ROUVY is a digital platform for athletes all over the world to compete, ride with friends for fun, do workouts and much more. ROUVY offers thousands of virtual locations and training options, including the chance to take part in races and cycle through the entire route catalogue. Thanks to a simulated but completely realistic riding experience, ROUVY is undoubtedly the most suitable option for cyclists of all levels to stay fit or prepare for their next race day. www.rouvy.com.