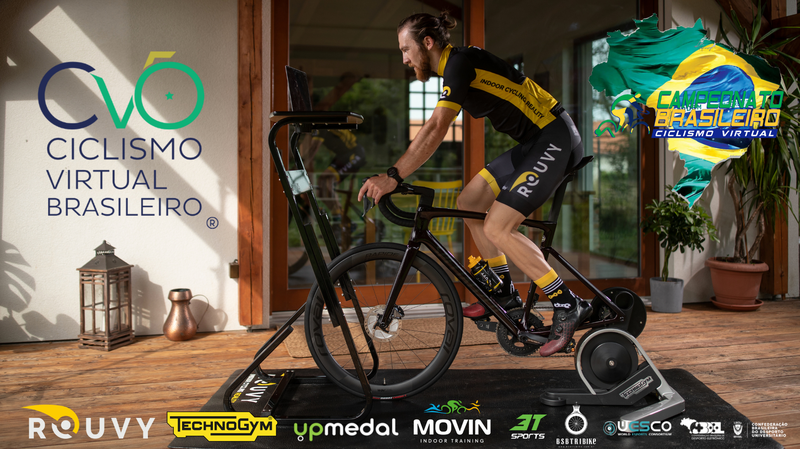 Brasilia, Brazil / February 3, 2022 - The 2022 season promises to be very busy for BRAZILIAN VIRTUAL CYCLING. The success of the 1st edition of the Brazilian Virtual Cycling Championships revealed the Brazilian Champions of the new format: Franklin Almeida and Maria Belén Luz in the professional category. The 2022 season will feature 11 stages representing different cities and starts on February 5th with the GPBRASIL VIRTUAL CYCLING – TOUR DE GOI NIA on the fast international racetrack of Goiânia.

The Brazilian Virtual Cycling Championships is supported by the Brazilian Confederation of Electronic Sports - CBDEL and the Brazilian Confederation of University Sports - CBDU. It is also being recognized by the World Consortium of Electronic Sports - WESCO (World Esport Consortium). Once again, ROUVY is the official platform of BRAZILIAN VIRTUAL CYCLING, which demonstrates the serious and continuous growth of the popularity of virtual cycling in Brazil.

Petr Samek, CEO of ROUVY, says, “It is so great and exciting to see Brazil and other countries following the example of the Czech Republic where ROUVY hosted the first National Championships. The team at ROUVY expects the virtual format to grow into a new cycling discipline worldwide”.

In addition to the standard individual standings, the big news of the 2022 season is the team scoring format in which the individual scores of the athletes will count towards the total sum to define the podium team for the season. The teams already confirmed are:

Schubert Abreu, BVC Technical Director: “This year we expect more professionals and teams to join the virtual peloton. Due to ROUVY's incredible augmented technology, cycling and fitness enthusiasts from all over the world can ride through the incredible centers and main postcards of Brazilian cities and compete side by side with national professionals. We are delighted to introduce so many new cities on this year's tour”.

The series of competitions will be hosted in the open mixed format for the whole world, but Brazilian athletes who want to score for the BRAZILIAN VIRTUAL CYCLING CHAMPIONSHIPS must register at ciclismovirtualbr.com.br.

Registration for the 1st race, in a criterium format with 8 laps, is open.

BRAZILIAN VIRTUAL CYCLING was born from a start-up formed by specialists in the technical, marketing, logistics and live streaming areas. It is a unique and innovative project in the Brazilian sports scene that mixes competition, entertainment and tourism through virtualized cycling! www.ciclismovirtualbr.com.br

ROUVY is a digital platform that brings the experience of real-life cycling competitions to one’s home. ROUVY offers thousands of exciting and stunning virtual roads to join the pro squad online or explore the world with friends. Combining augmented reality technology with real videos, ROUVY makes home training realistic and fun. Cycling enthusiasts and demanding athletes can cycle the world from home to get in shape or prepare for the next race! www.rouvy.com